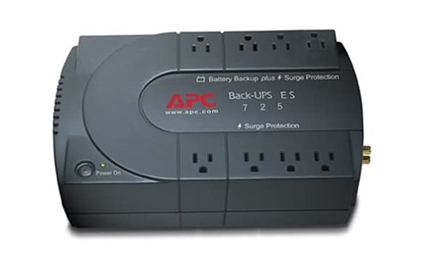 Uninterruptible Power Supply systems, otherwise known as UPS or battery backup devices, are commonplace in homes and offices nowadays. Their primary purpose is to keep devices on in the event of a sudden power outage, but some devices may regulate voltage and prevent damage from power surges. A UPS does this by housing a battery and circuit breaker within it. If a storm or service provider error causes a power outage, the UPS will quickly switch to battery power. The devices that are connected will remain online so long as the battery has sufficient charge. If too much power is being provided, the surge protector will keep your devices from damage. Keep in mind that UPS devices are not designed with the intention of being a long-term power source. The goal of a UPS is to keep devices powered long enough to be shut down gracefully, thus preventing loss of data or damage to electrical circuits.

Deciding Capacity and What to Plug in

Battery backup devices often have several outlets, but not all of them must be backup protected. For example, the battery model shown here has 8 outlets total, of which half of them are backed up and the other half are using the device the same way any power strip prevents shorts. Common practice is to have a computer and its monitor(s) connected to the battery outlets and having less important devices such as phone chargers or lamps into the other side. Before plugging anything into a battery backup device, be sure the device has the capacity that you need to properly backup your devices. Manufacturers often estimate runtimes on their website, which is a decent starting point for deciding what model you should purchase.

Many battery backup manufacturers, including CyberPower and APC, pair their backup devices with software packages. While the battery does not need it to work, the software is a powerful tool that may be valuable to businesses. The software can often shutdown your devices safely in the event of an outage or give you reports about power consumption. Some can even email you in the event of an outage! Getting the most from these tools, which are often free, will help you protect your assets and maximize the value of the devices. The software packages can be found on manufacturers’ website and often require only a USB connection between the battery and the computer it is protecting.